Since 1991, a complete edition of all recordings in which Karlheinz Stockhausen has personally participated is being released on compact discs. Each CD in this series is identified by Stockhausen's signature followed by an encircled number. The numbers indicate the general historical order of the works.
Stockhausen realised the electronic music and participated in these recordings as conductor, performer, sound projectionist, and musical director. He personally mixed down the recordings, mastered them for CDs, wrote the texts and drew the covers.

(Horns, bass trombone, contrabass trombone and bass tuba need one mute each.
Prescribed for trumpets and tenor trombones are: 1 mute [bright] = pointed mute; 1 mute [dark] = cup mute or wawa, according to the choice of the conductor.)

Instrumentation of the orchestras:

or 4 octaves with xylophone
for the highest octave

Sticks and mallets:
In the score "hart" and "weich" ("hard" and "soft") are used to denote the mallets for all percussion instruments. As mallets of the same name can give different results in sound (due to the way the material has been prepared), a more exact prescription was dispensed with. Within the categories "hard" and "soft" the most varied sorts of mallets should be used, according to the instructions of the conductor. 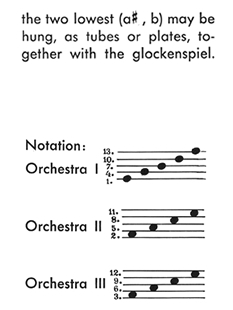 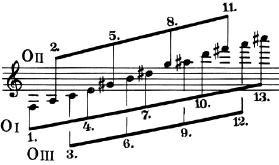 Each cowbell actually produces several tones; the dominating tone should have the indicated pitch.

The bells are to be hung (without clappers) on leather thongs from the stands, so that they swing freely. Otherwise the sound will be lost. Hit with a slanting motion on the outermost edge, or, in the case of "froschmaulschellen", on the curved part (pick out the best spot for resonance).
The following kinds of sticks are divided into two categories, "hart" and "weich" ("hard" and "soft"): leather mallets, heavy iron clappers, vibraphone mallets, mallets with wooden balls, felt etc.
Within each category the sticks should varied according to the conductor's indications.

12 "metal - instruments" : 3 tam-tams and 9 cymbals (from the largest to the smallest) should be arranged in a scale from 1-12, from low to high (in the dominating range of the sound frequencies), and divided in fours among the three orchestras. 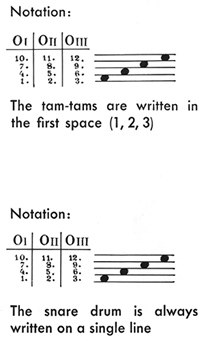 Within each category the sticks should be varied according to the conductor's indications.

12 drums: tomtoms and/or tumbas and bongos (in the high register) with the following pitches: 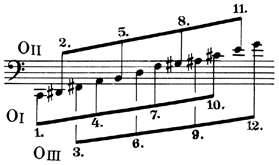 3 side drums with snares (shallow jazz-drums, very bright sound). Disengage the snares when not in use. 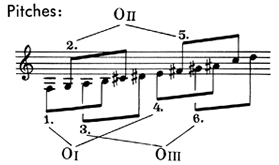 The wooden drums were hired from an (ethnographical) museum for the first performance. For subsequent performances new ones were made by a violin maker in accordance with the pitch requirements of the score. The drums should be struck on the thin portion of the wood alongside the slots (the two sides give different pitches). In fast groups of notes other parts of the drums may be struck to provide variation in pitch and timbre. Beaters in the categories "hart" (wood, hard rubber, leather) and "weich" (felt, soft rubber, wool) should be varied as indicated above for metal instruments.

For all tutti rehearsals, each of the three conductors needs a microphone and a monitor loudspeaker to be able to communicate with the other two conductors, but his own microphone should not be circuited to his own monitor (danger of feed-back). This circuiting must be ready and tested before the first tutti rehearsal.

Sound projectionist for the tutti rehearsals

During the past several years, I have occasionally participated in the tutti rehearsals of GRUPPEN for 3 orchestras from the middle of the hall during the final three days preceding a performance. In the course of these rehearsals, the conductors realised how important it was – and they have suggested for the future – to have a sound director in the middle of the hall who balances the dynamics, communicates with the conductors about other corrections, and, in general, leads the rehearsals, speaking over a microphone, with monitor loudspeakers on each podium.
It is a fact, that the three conductors can not judge, from their respective positions, how the dynamic levels sound in the hall, and what the actual effect is of "hard" and "soft" beaters (percussion) with in the ensemble. The sound director must be completely familiar with the work and the score, be able to communicate concisely and lead the rehearsals clearly, and be chosen by the three conductors. He (she) should also control the microphone amplification of the guitar and piano (in orchestra II) using a small mixer at the middle of the hall, and attend (ahead of time) to the set-up of the 3 microphones (1 for guitar, 2 for piano treble-bass) and the installation of 2 x 2 loudspeakers, which are hung or set up (circa 4 m high) at the left and right next to orchestra II.

One of the three conductors must visit the performance venue when a performance of GRUPPEN has been definitively planned. He (she) must also have a detailed discussion with the percussionists and check all percussion instruments, celesta, glockenspiel etc. Experience has repeatedly shown that the pitches of the percussion instruments were wrong. In addition, the orchestra parts must be checked by the conductors ahead of time, because every now and then, uncorrected rental material is delivered.

Supplement to the GRUPPEN score

must be rehearsed in such a way that

can be clearly heard even in the last row of seats. Generally,

are played too softly;

must be quite intense.

in the percussion must be balanced with the other instruments, especially when hard beaters are being used.

simultaneously indicated for percussion and for other instruments must be heard as equally loud. Depending on beaters and context, this can lead to changing the dynamics of the percussion.